What Are the 5 Stages of Grief? 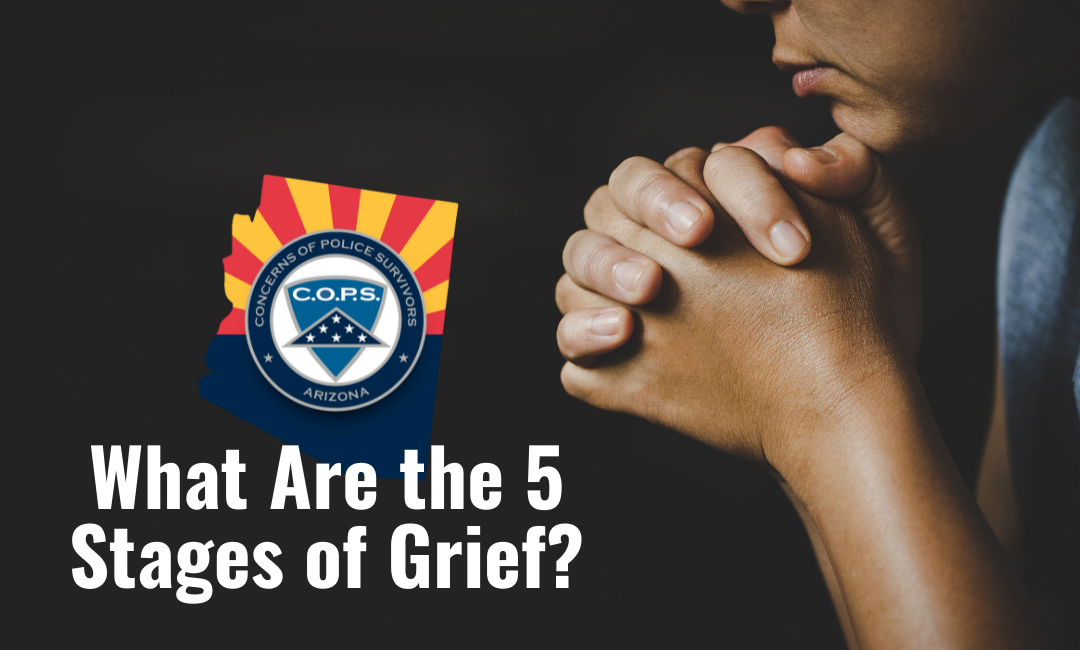 Everyone in our C.O.P.S. Arizona organization has experienced grief in one form or another – whether it be from the loss of a family member, coworker, or friend. Specifically, our nonprofit is focused on providing grief support and resources to survivors who lost a loved one in a line-of-duty death.

Where Did the 5 Stages of Grief Come From?

The idea that grief is not just one singular emotion, but could be divided up into subcategories, comes from a Swiss-American psychiatrist named Elizabeth Kübler-Ross. She wrote a book called “On Death and Dying” in 1969 based on her observations from working with terminally ill patients for many years.

Kübler-Ross felt there was a lack of instruction on the subject of death and dying in medical school. She later noted that although she refers to these different emotions as “stages,” they don’t necessarily occur linearly. People who are grieving often move back and forth between different stages at different times of their lives, as grief isn’t something that you “get over” but something that you learn how to cope with.

What Are the 5 Stages of Grief?

For many people, the initial reaction to the death of a loved one is disbelief that it can be true. Denial gives your psyche more time to process such intense and sudden feelings.

Anger, much like denial, is a coping mechanism for the sorrow you are feeling. It can be directed at anyone: someone responsible for your loved one’s death, family, friends, or even at your deceased loved one.

Since grief often leaves people feeling completely out of control, bargaining is a way to attempt to regain some of that control. This stage is characterized by “what if” and “if only” statements. For anyone who is religious, it’s also common to try to make deals or promises to God in return for relief from emotional suffering.

While the last few stages of grief are more active, depression is a more passive stage. The feelings of sorrow you denied, covered up with anger, or chased away with bargaining have caught up to you. Many people isolate themselves during this stage to process the intensity of their sadness. A feeling of ongoing heaviness or fogginess is also common.

Contrary to how it might sound, acceptance isn’t necessarily a happier stage of grief than the other four. It doesn’t mean that you have “moved on” (which is an unhelpful thing for anyone to say). Instead, acceptance simply means your emotions have become more stable and you have become more accustomed to your new way of life, often referred to as a “new normal.” Grief does not disappear at this stage, but it often becomes more manageable for you emotionally.

C.O.P.S. Grief Support for Survivors of Line of Duty Deaths

No matter where you find yourself in your grief journey, C.O.P.S. Arizona is here to support you. We host annual retreats with grief counseling sessions, train police departments in processing grief, and offer scholarships to students who lost an immediate family member in the line of duty. Everyone involved in the C.O.P.S. organization lost a police officer they love, and it’s a community built on making connections with people who understand.

If you lost a family member or co-worker in the line of duty, reach out to us any time to learn more about the resources we offer.

C.O.P.S. Arizona is dedicated to rebuilding shattered lives of survivors and co-workers affected by line of duty deaths. We offer programs and scholarships for survivors in our local Arizona chapter. For more information, visit https://www.copsarizona.org/.